arly efforts to boost registrations among Dallas’ Black and Hispanic communities have yet to produce more equitable access to the COVID-19 vaccine, new data obtained by The Dallas Morning News shows.

Six out of every 10 city residents who have enrolled for the shot with the Dallas County health department through Jan. 24 were white, according to data obtained Thursday. That’s twice the rate of the city’s overall white population.

Hispanics — which make up the city’s largest ethnic group at 42% — were the second-largest enrollment group, making up about 20%. Only 1 out of every 10 Dallas residents who registered for the vaccine was Black, a 14 percentage-point gap compared with the overall city population.

The larger pool of sign-ups — which includes residents from across the Lone Star State — showed similar equity gaps. Of the 370,049 registrants, 22.4% were from outside Dallas County, said a PCCI spokesman, confirming the data obtained by The News.

The Dallas County health department is responsible for managing the registration list for its own vaccine hub at Fair Park in South Dallas, as well as others in the county operated by groups such as Parkland Health & Hospital System and UT Southwestern. State hubs are required to vaccinate any Texan regardless of where they live. 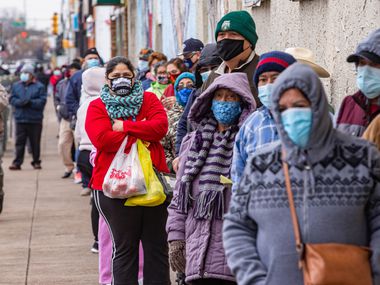 Elected leaders and public health officials here have made equity a key measure of how well they distribute the vaccine. State data, which is limited due to a large percentage of people who do not self-report their race or ethnicity, shows that officials continue to miss that benchmark. As of Thursday, 42% of all Dallas County residents who had received at least one shot and reported their race or ethnicity were white.

“It’s not a surprise,” said Dallas County Judge Clay Jenkins. “It’s the challenge we’ve been up against since the beginning. The early adopters who jumped on our registration list are who they are. We have our work cut out for us.”

To improve diversity among those who sign up to get the vaccine, officials have begun to push registration sites in historically underrepresented neighborhoods — especially in southern Dallas. City council members, county commissioners and the county health department have hosted enrollment events in neighborhoods, garnering hundreds of sign-ups.

The city on Thursday also announced the launch of several pop-up registration sites at grocery stores, recreation centers and other community spots where people can get help signing up for a COVID-19 vaccine.

Earlier this week, county commissioners also approved contracts for a public relations firm to lead outreach, a new registration system that should make online enrollment easier and less susceptible to hacks, and a new call center to handle a higher call volume from residents with limited internet access.

Elected officials have stressed patience as demand for shots greatly outpaces supply. The county’s weekly supply of about 9,000 shots is a fraction compared with its registration list, which has surpassed 410,000.

Jenkins said Thursday the county has applied to become a federal mega site that could bring 12,000 shots a day. At a news conference at Fair Park, he also encouraged residents who can travel to consider registering with other vaccine hubs across the state.

Commissioner Elba Garcia, who represents western Dallas County, said late Thursday that an increase in doses is important. But residents — especially Blacks and Latinos — must be aware of registration opportunities.

“We need to make sure we all get educated,” she said. “We have to be aware that the goal is to go back to a semi-normal life. And to do that, we have to reach widespread immunity. It’s in our hands to make that happen.”

The PCCI analysis, which was completed Wednesday, also broke down registration by ZIP code, age and gender.

The five ZIP codes with the most registrations in Dallas County were all north of Interstate 30 — which has long served as a dividing line among race and wealth. All five ZIP codes were mostly white, and the household income tended to be well above the regional average.

For example, the University Park ZIP code of 75225 had the fifth-highest number of registered residents: 7,435. Nearly 90% of people who live in that neighborhood are white, and the average household income is $161,000.

The only ZIP code to crack the top 10 and fall below Interstate 30 was 75115, which includes the city of DeSoto. Slightly more than two-thirds of the residents who live there are Black, and the average income is $72,000.

Overall, registrants in the larger pool of 370,000 tended to be older. Women slightly outpaced men at 54%.

While anyone can register for the vaccine with Dallas County, the state has said those 65 or older, or who are at least 16 with a major medical condition, qualify for a dose. Health care workers on the front lines of the coronavirus pandemic and residents and employees of long-term care facilities are also eligible. However, Dallas County’s health department is prioritizing residents 65 and older with some medical conditions at its Fair Park location. Appointments by invitation are required.

Other hubs in Dallas County and throughout North Texas may focus on other priority populations.

In recent days, elected officials have ramped up their outreach to Black and Hispanic communities.

A panel of Dallas-area leaders met virtually on Thursday. The discussion, which was in Spanish, centered on hesitancy among Hispanics to get the COVID-19 vaccines.

The panel, which included Latino government and community leaders as well as medical experts, discussed several fears, such as whether those who are undocumented can get a vaccine, how to combat misinformation and fear over the vaccines or side effects.

”I think a lot of people are afraid because they don’t have the right information,” said Nubia Torres, director of immigration and legal services for Catholic Charities.

Commissioner Garcia, who participated on the panel, said while vaccine distribution sites require some form of identification, all that’s needed is a document with a name and photo. The Mexican Consul offers identity cards — called a matrícula consular, which is issued to Mexican citizens — that can be used to get the vaccine.

“The most important thing is that you get registered,” Garcia said.

One reason Hispanics might be more inclined to get a vaccine is because people of color have been disproportionately affected by the virus.

In a Pew survey, 61% of Hispanics said they knew someone who had been hospitalized or died because of the virus.