Skip to content
By: Mistie BugarinPosted on November 5, 2020
CLOSE

The Fishers Fall Farmers’ Market is virtual in 2020.

For years, farmers markets in the Indianapolis area have served as launching pads for local entrepreneurs hoping to expand their businesses or open a place of their own.

But they’re also a reliable income source for the small bakers, candy makers, vegetable growers, beekeepers and others who can depend on those weekend sales to stay afloat.

Like nearly everything else in 2020, the COVID-19 pandemic has disrupted that business model. 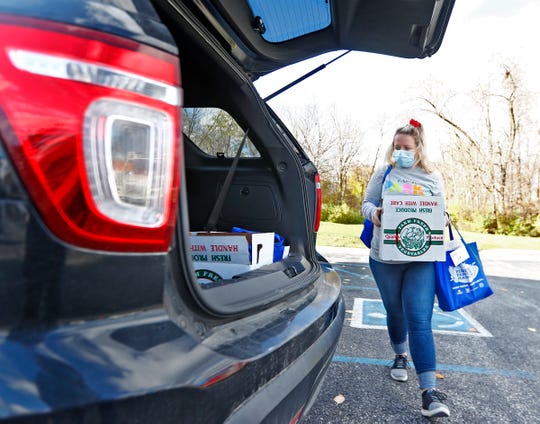 Fishers Parks’ Agriculture Coordinator Jackie Leeuw packs orders from the Fishers Farmers’ Market to deliver to homes, Friday, Oct. 30, 2020. The fall market is virtual this year. Customers order through the Fishers parks department website, online. The venders then drop off the orders, and parks staff separates the orders and delivers them to homes. (Photo: Kelly Wilkinson/IndyStar)

After opening the outdoor market in the summer during a flattening of coronavirus cases, Fishers is offering only virtual shopping for the indoor market this fall as infections increase, and that is forcing vendors to adjust on the fly.

For the Bubble Tea Lady, who makes flavored drinks loaded with gelatinous flavored bubbles in the style of the Taiwanese drinks, the coronavirus couldn’t have come at a worse time.

Avanti Snyder has been a fixture at the Fishers farmer’s markets for eight years and was just beginning to expand in a big way.

“I was getting some corporate accounts for employee appreciation days in offices and events like that,” she said. “Now that’s on hold.”

She was also making inroads at high schools for events such as swimming meets, group chorus and wrestling matches, which has stopped as well. And, Snyder said, she was close to getting the biggest boost of all — a spot at the Indiana State Fair — but the fair was cancelled over the summer.

Snyder now has to settle for selling bubble tea kits at the Fishers virtual market and sales are much lower than they usually would be.

‘We’re pretty used to it by now’

Vendors like Snyder, whose products are mostly consumed at the market while people stroll and shop, are hurt more with the elimination of live markets than those who sell pre-packages items like jars of kimchi or even fruits and vegetables.

The Fishers Parks and Recreation Department, which runs the market, is helping making the virtual transition as easy as possible, said Jackie Leeuw, the agriculture coordinator for Fishers parks. 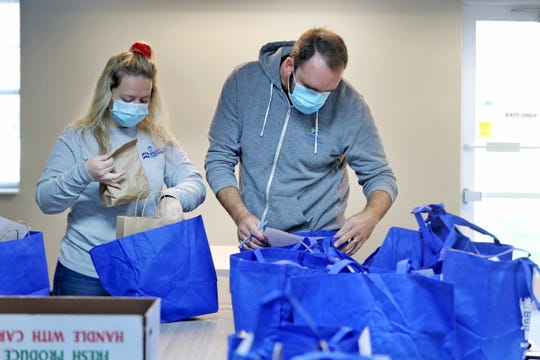 The orders come into the park’s website Saturday through noon Wednesday, when the city forwards them to the vendors. The vendors have until Friday to fill the orders and drop them off between 10:30 and 11:30 a.m. at the park district office.

Waiting parks department employees then bag the orders and deliver them to the customers.

“We began this is exclusively in May for a few weeks,” Leeuw said, “and continued through the summer so we’re pretty used to it by now.”

Some vendors said a small advantage of the system is that they know exactly how much to prepare instead of estimating before they load up for the Saturday markets, saving on some waste.

Though the pandemic has hurt Snyder’s business, she did discover unexpected upside: it forced her to become creative and “open new revenue streams.”

Over the summer, Snyder arranged with neighborhoods in Hamilton County to set-up operations in their subdivisions. She pitched a tent, as she would at the farmers market, near the clubhouse, and opened for business. The arrangement also allowed her to make contacts with potential future customers.

‘This is terribly slow’

Tuwanna Roberson, who sells Louise’s Sweets, said the summer market in Fishers was surprisingly robust but sales are way down this fall.

“It is going kind of slow and I don’t know why,” said Robinson, who makes chocolate treats from a commercial kitchen on the West Side of Indianapolis. “Normally in the winter it is slower for me but this is terribly slow.”

Attendance in the summer seemed near what it is normally, so she expected better sales in the fall, said Roberson, who has attended four Fishers markets.

“I think people were just itching to get outside,” Roberson said, “and really anxious to be there in the summer.”

Roberson started marketing her baked and chocolate-covered sweets in 2015 after making a batch for her daughter.

“She didn’t like cake so I was always trying to find things for her,”  Roberson said. “Then she ordered some chocolate-covered Oreos online and loved them. She asked if I could make them.” 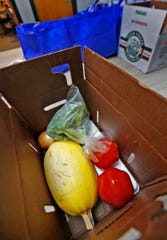 Produce is brought in for homeowners, from the Fishers Farmers’ Market, Friday, Oct. 30, 2020. The fall market is virtual this year. Customers order through the Fishers parks department website, online. The venders then drop off the orders, and parks staff separates the orders and delivers them to homes. (Photo: Kelly Wilkinson/IndyStar)

Roberson made a big batch for her daughter to take to school. Her daughter gave some to the dean of students and teachers. The next day the school called her and asked if she could make 250 for the school for Valentines Day, and then asked for another load of 300 for St. Patrick’s Day.

The popularity convinced her she could sell her concoctions. When she got laid off from her job, Roberson decided to pursue the sweet-making full-time and has since expanded her menu, which now includes Rice Krispies treats, six types of cookies, chocolate covered popcorn and chocolate strawberry kabobs.

Roberson also participates in famers markets in Avon, Brownsburg and Plainfield but Fishers is the most lucrative.

“It’s not even close,” Roberson said.

“Our product is cooked and served on-site, which is the best way to enjoy it,” Lewis said, owner of The Walking Waffle.

The ready-made Belgian waffles are served in cardboard boat with a plastic fork. They are prepared plain or with toppings, such as Nutella or with strawberries, blueberries and homemade whipped cream. Lewis said they are the ideal eat-on-the-spot breakfast for Saturday morning markets. 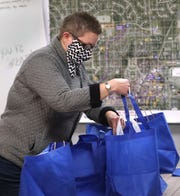 Lydia Armstrong, with Gluten Free Creations of Speedway, puts her home baked goods in bags to be delivered for the Fishers Farmers’ Market, Friday, Oct. 30, 2020. The fall market is virtual this year. Customers order through the Fishers parks department website, online. The venders then drop off the orders, and parks staff separates the orders and delivers them to homes. (Photo: Kelly Wilkinson/IndyStar)

Lewis said she sells packages of waffles that can be heated up but there isn’t enough demand to participate in a virtual market and she doesn’t have any broad retail production system in place.

“We are working to revamp the website but aren’t there yet,”  Lewis said.

Lewis said she will still set-up in Carmel’s winter farmers market, which will be held indoors with COVID-19 safety protocols enforced.

To order from the market log on to https://fishersfarmersmarket.localfoodmarketplace.com between Saturday and Wednesday. Orders will be delivered on Fridays.