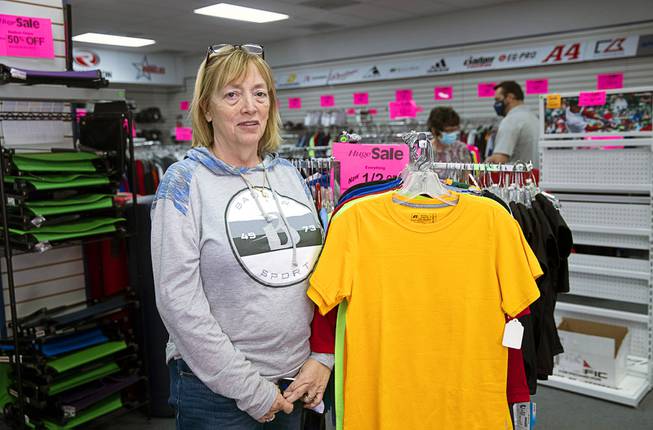 The line of customers was at least 100 people deep outside Sportco Sporting Goods on this February afternoon.

The longtime supplier of athletic gear in the valley was going out of business after more than 30 years, and customers were eager to get their hands on some discounted equipment during a liquidation sale.

If you live in east Las Vegas or Henderson, Sportco — long before online shopping took off — was the place to buy your child’s first baseball glove or to purchase a new bat for the beer-league softball game at nearby Sunset Park. Same with team uniforms, football pads, high school letter jackets, school T-shirts and more.

Longtime owner Rob Campbell cried as he liquidated his stock, and not necessarily because the store he owned since the 1990s would be closing as a victim of the coronavirus pandemic, sending him into early retirement.

Rather, it was the constant compliments from patrons, who waited in a line that stretched nearly to Pecos Road from the storefront on Sunset Road between Eastern Avenue and Pecos.

Campbell was the type of guy who would meet a coach in a parking lot at 5 a.m. to make sure a child had his jersey, or who frequently would outfit high school teams on the promise that they would pay after a fundraiser. In some ways, he was the glue that held prep sports together — after all, having a jersey or school apparel is an invaluable part of the experience, and they were always available at Sportco.

“People waited for more than two hours to come in,” said Brenda Campbell, Rob’s wife. “They were telling him how much they would miss him. He cried all day.”

On Feb. 18, one week after the first day of the sale, Rob Campbell suddenly died. He was 63.

Rob Campbell would frequently work what he called “half days” at the store, which meant arriving at 6 a.m. and staying until dark. Sportco’s patrons weren’t just customers — they became friends.

Sam Thomas, the longtime Las Vegas High School baseball coach, and Campbell met in the mid-1990s when Thomas was an assistant at Green Valley High. The team was heading to Arizona for a tournament to open the season, and Campbell arrived at the parking lot in the middle of the night to deliver uniforms to the players as the team was boarding the bus.

“He had a passion for coming to the rescue. He always found the way to make it happen for the kids,” Thomas said.

When Thomas left to become the head coach at Las Vegas, he coordinated with Campbell to have T-shirts printed for the team. His players gathered ahead of a scrimmage for Thomas to distribute the new gear. Thomas opened the box and pulled out the first shirt, immediately noticing something was incorrect — it was Green Valley blue and green.

As a practical joke, Campbell had placed one Green Valley shirt at the top of the Las Vegas order.

Jim Dirk, one of Campbell’s closest friends, would frequently stop by Sportco simply to visit. He recalls seeing his friend one summer night attending a baseball tournament at Arroyo Grande Sports Complex. One of the players, a kid in grade school, was distraught because his name was misspelled on his jersey.

Campbell quickly drove back to the shop and made another jersey with the correct spelling.

Then, there was that time at a Little League opening day when Campbell noticed one of the players was big for his age and had a jersey that was too tight. So, Campbell headed back to Sportco to find a bigger size.

“(Rob) was a big teddy bear,” Brenda Campbell said. “He would stop at nothing to make sure the kids had what they needed. Rob was a big guy himself at 350 pounds. He wasn’t going to have a kid in a uniform that didn’t fit.”

Sportco did more than recreation and prep sports, managing lucrative corporate accounts that gave the Campbells the flexibility to give back to the community.

They also worked with UNLV athletics on uniforms and other apparel, and last year started working with the Raiders. They even did practice uniforms for the Golden State Warriors.

For as passionate as Campbell was about local sports, everything stopped on Sundays. He served at Beautiful Savior Lutheran Church, where he also volunteered for the finance and remodeling committees.

“Rob was the type of guy where if something needed to get done, he was going to make it happen,” Brenda Campbell said. “His charity had no limits.”

Thomas saw that charity firsthand repeatedly over the years. Take when the Las Vegas coaches were looking for a way to celebrate the graduation of a student manager with cerebral palsy. Campbell suggested getting the teen a letter jacket.

Of course, Campbell’s suggestion came with a donation, as he volunteered to create the design and pay for the cost of the coat. Those run at least $300.

Rob and Brenda planned to visit all 50 states in their retirement. They also wanted to hit every Major League Baseball stadium, especially following Bryce Harper and the Philadelphia Phillies. Campbell rooted for whatever team the Las Vegas native Harper played for. The Harpers, just like many other baseball families, were frequent customers at the store.

“The saddest thing is he was closing the store to enjoy life in retirement and this happened,” Dirk said.

A ceremony of life will be held from 3-5 p.m. April 10 at the Arroyo Grande Sports Complex, 298 North Arroyo Grande Boulevard, in Green Valley.