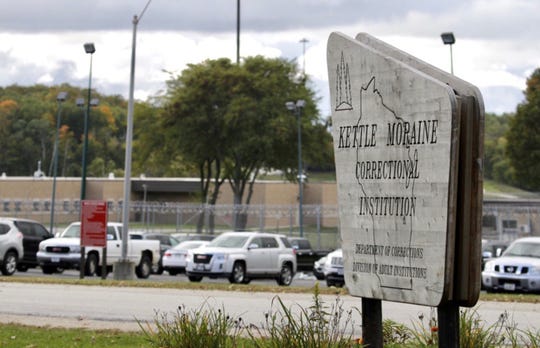 SHEBOYGAN – With two in five inmates at the Kettle Moraine Correctional Institution infected with COVID-19 in the state’s largest prison outbreak, officials can no longer isolate the sick from the uninfected.

Devante Welch, who is among those who tested positive, says it’s “a whole new environment.” The medium-security prison now feels like a maximum-security one.

The prison is locked down, limiting the movement of inmates. They access certain parts of the prison on rotating schedules, but for the most part are quarantined in their cells with their cellmates.

More than 600 inmates have tested positive at KMCI since early September — or over half of the prison’s 1,100 population. As of Thursday afternoon, nearly 450 cases were still active.

Welch, who had a cough for two weeks up until late last week, compared the lockdown to solitary confinement, only with a cellmate. He’s trying to make the best of it, he said, but he’s not used to only being able to leave his cell for an hour a day.

The first four or five days with COVID-19 were the worst, Welch said. He had a migraine and a fever, and a nurse saw him sporadically every two or three days to take his temperature, he said. He said he was sick for a week before he was able to get some Tylenol.

“It’s chaotic,” said inmate Joseph Cook, who looked out for his cellmate when he tested positive and got sick.

“I was scared for him,” Cook said, describing his cellmate’s symptoms: loss of taste and smell, coughing, chills and diarrhea. Cook said his cellmate didn’t eat much, and when he slept, it looked agonizing.

Cook thinks he was infected, too, after he had a headache, cold sweats, dizziness and lost his taste. His symptoms lasted about a week.

Cook said the nursing staff is overwhelmed, but he said an officer made sure his cellmate was seen regularly.

There is a constant fear of getting sick, Cook said, but inmates are most frustrated about the lack of communication on why precautions have changed and how long they’ll be in lockdown.

“Nothing is clear,” Cook said. “People are scared. People don’t want to die.”

Policies have changed without explanation, Cook said, like a two-week period where they couldn’t get ice from an ice machine but they could get water from the same machine. And the kiosk machine where they load money onto their accounts for things like sending emails and making phone calls to communicate with their families was shut down for several days.

The Department of Corrections said inmates couldn’t get hot water to wash dishes or make food with starting last Monday with the institution-wide shutdown, but as of last Friday, they could access it on a rotating basis.

Christine Prieto, whose husband got COVID-19 in the prison, said she knows families of inmates who are worried about their loved ones because they have more serious health conditions. Luckily, Prieto said, her husband is pretty healthy. He tested negative a little over a month ago but after his cellmate tested positive, he did too. They’ve both since recovered.

West-Schroder said she has heard from several family members of people incarcerated at Kettle Moraine since the outbreak. Concerns over what kind of medical attention they are getting and confusion over the decisions to close certain things down are among the concerns she’s heard.

Cellmates of those who tested positive were told they’d get new N95 masks every five days, Prieto said, but her husband hasn’t received a new one in over month. Asked about mask availability and how inmates get them, the DOC said N95s were provided and, depending on availability, some got additional disposable masks. All inmates at DOC facilities are also provided three double-ply cotton masks that can be washed and re-used, the DOC said.

Even after the prison had its first positive cases, Prieto said, inmates still comingled in shared areas like rec (where they work out) and during classes.

The DOC confirmed shared areas were still in use — with enhanced cleaning — as the prison saw its first cases, noting there was still a small enough number of positive cases that they were being isolated from the general population. But when the number of positive cases quickly increased, everyone was quarantined, and recreation and classes were canceled, the DOC said.

The DOC has a dashboard online, which shows how rapidly the number of cases rose. According to that tool, the prison saw its first positive case in late June. It had a total of 13 positive cases Sept. 1, but that number exploded, reaching 542 total cases at the end of the month.

The DOC said the National Guard conducted facility-wide testing at KMCI on three occasions: in late June, the first couple days of September, and September 23 and 24.