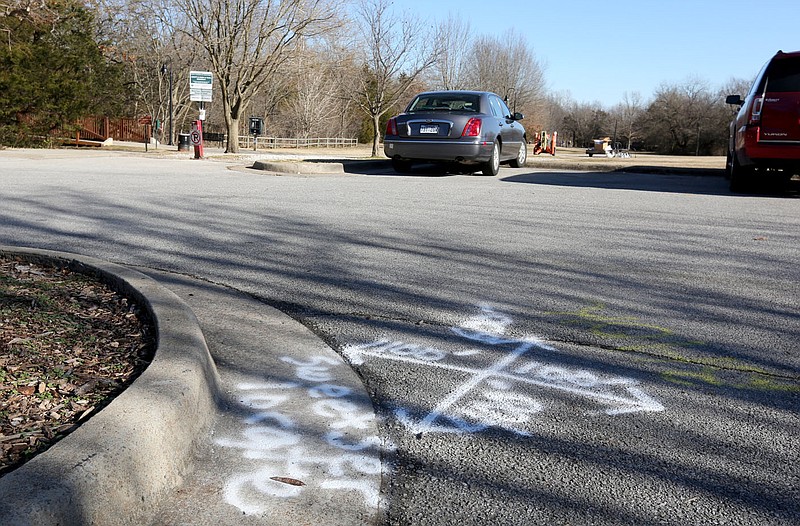 Location markers are visible Monday in the parking lot at Gulley Park near Township Street in Fayetteville. The parking lot will double in size to accommodate a total of 68 lighted parking spaces, and a wet garden area will be created, which will serve to hold and filter stormwater before it enters Niokaska Creek. The project is expected to be completed in spring. Check out nwaonline.com/210105Daily/ and nwadg.com/photos for a photo gallery.
(NWA Democrat-Gazette/David Gottschalk)

FAYETTEVILLE — The city’s resident-led advisory panel on parks and recreation rejected a request Monday to accept land to use as a park in association with a planned neighborhood development outside the northern city limit.

The request was part of the plan for Chandler Crossing, a 366-lot subdivision east of Crossover and Zion roads. The board was presented an option to accept about 8 ½ acres of the 82-acre site to use as a park. In the alternative, the city could accept $398,574 to put toward parks development in the northeast quadrant of the city.

In Fayetteville, residential developers have the option to offer park land to the city or pay a fee instead.

The board recommended the city accept the money. The City Council will make the final decision and will take up a rezoning and annexation request for the site on Thursday.

Ted Jack, park planning superintendent, advised the board against accepting the land because of its proximity to other parks. The proposed land lies south of Zion Road, about 420 feet from David Lashley Park to the north, he said. Lake Fayetteville also is about half a mile to the west.

“Generally having the ability to foster social connections and build community cohesion is one of the things parks can do, and neighborhood parks can do that well,” Jack said. “But they need to have enough people coming to them and using them to make them more successful. Putting two parks right next to each other actually works against that, because you’re splitting the population feeding into that park.”

The city’s staff and money for parks also are stretched thin, and there are other parts of the city that have no parks within a 1-mile radius, Jack said.

Alli Quinlan with Flintlock Architecture & Landscape presented the request as part of the development team and said the land could function as an ecologically themed park to improve the water quality of Hilton Creek running through it. She also said the developers would be open to having some kind of connection running from the land to Zion Road, serving as a link to David Lashley Park on the other side of the road.

Four residents spoke, all in support of turning the land into a park. Margaret Britain said she understood water quality lies outside the scope of parks and recreation, but something needs to be done to improve the watershed. She and other residents said reducing runoff at the creek also would help the water quality at Lake Fayetteville.

“Consider using this land not as a typical park — no playground equipment or anything like that,” Britain said. “But use it as a way to protect one of your big, beautiful parks.”

Board Member Nicole Claesen said she struggled with the vote. She said she hoped the developer was listening to public comment and will opt to preserve the area rather than build on it.

“We’ve definitely been listening to the neighbors and are trying to find a good solution,” Quinlan said.

The nine-member board met online via Zoom and introduced two new members, Andrew Brink and Julie Chambers. Will Dockery was selected as the board’s chairman. 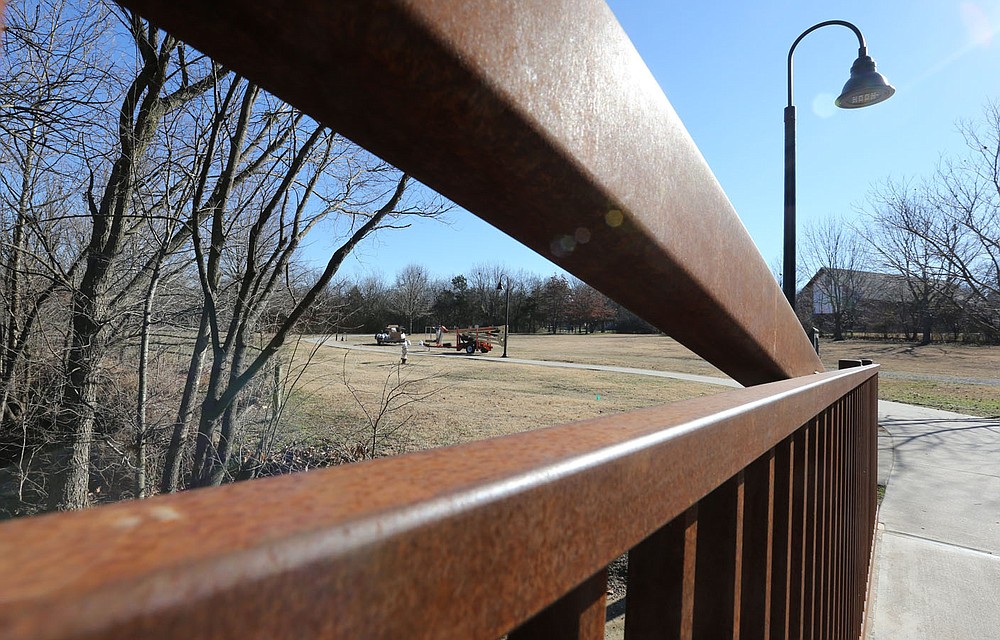 The area east of the existing parking lot at Gulley Park near Township Street is visible Monday in Fayetteville. The parking lot will double in size to accommodate a total of 68 lighted parking spaces, and a wet garden area will be created, which will serve to hold and filter stormwater before it enters Niokaska Creek. The project is expected to be completed in the spring. Check out nwaonline.com/210105Daily/ and nwadg.com/photos for a photo gallery.
(NWA Democrat-Gazette/David Gottschalk)

Work began Monday on improvements at the Gulley Park parking lot on Township Street. The lot will double in size with 68 lighted spaces and a wet garden to hold and filter stormwater before it enters Niokaska Creek, according to a city news release.

The project should finish in spring. During construction, the lot and the walking trail through the west side of the lot will be closed. The rest of Gulley Park will stay open.

Visitors are asked to use the lot at Old Wire Road or walk or bike to the park from the Niokaska Creek Trail or Old Wire Road cycle track.

A bond issue voters approved in 2019 is paying for the project. Next will come improvements to the playground area and the addition of an interactive fountain, the release states.

Stacy Ryburn can be reached by email at [email protected] or on Twitter @stacyryburn.

Print Headline: Park board chooses fee instead of land with development