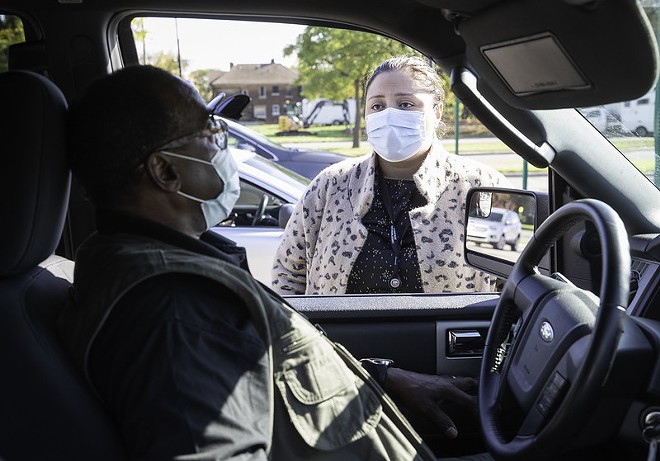 As the number of daily coronavirus cases continue to rise to record levels, city of Detroit officials said Monday they will step up enforcement of Michigan’s new COVID-19 restrictions.

“We are doing more and more surprise inspections,” Mayor Mike Duggan said at a news conference Monday. “We are going to be very vigilant over the next couple of months.”

The city is also urging residents to report businesses, schools, and others that are not complying. Residents can make anonymous complaints online.

Four schools in Detroit have reported outbreaks so far, but city officials didn’t say which ones.

Gov. Gretchen Whitmer announced new restrictions Sunday, including a temporary ban on indoor dine-in service at restaurants and bars, in-person instruction at high schools and colleges, and the closure of movie theaters, bowling alleys, and casinos.

The city is also partnering with Henry Ford Health System to inspect all 26 nursing homes, as well as homeless shelters and warming centers.

City officials are encouraging residents to get tested if they have symptoms or suspect they were exposed to someone infected with COVID-19. The city’s new testing site is at the Joseph Walter Williams Community Center at 8431 Rosa Parks, and is open from 9 a.m. to 5 p.m. on Monday through Friday. To make an appointment, call 313-230-0505.

“Everyone needs to do their part in order to keep Detroit businesses open,” said Denise Fair, the city’s chief public health officer. “And that means following health guidelines so that Detroiters can go shopping or dine out with a level of confidence that all businesses are taking steps to ensure people are as safe as possible from contracting this disease.”

Duggan said he canceled his family’s Thanksgiving plans over the weekend and suggested others do, too.

“The reality is Thanksgiving dinner is going to put the people closest to you at the closest risk,” Duggan said.

Asked about the restrictions’ impact on the city’s budget, Duggan said his mind is on the safety of Detroiters.

“The budget is not my first concern right now,” he said. “Right now I want to protect the people of Detroit, and we will deal with the budget later.”

Stay on top of Detroit news and views. Sign up for our weekly issue newsletter delivered each Wednesday.