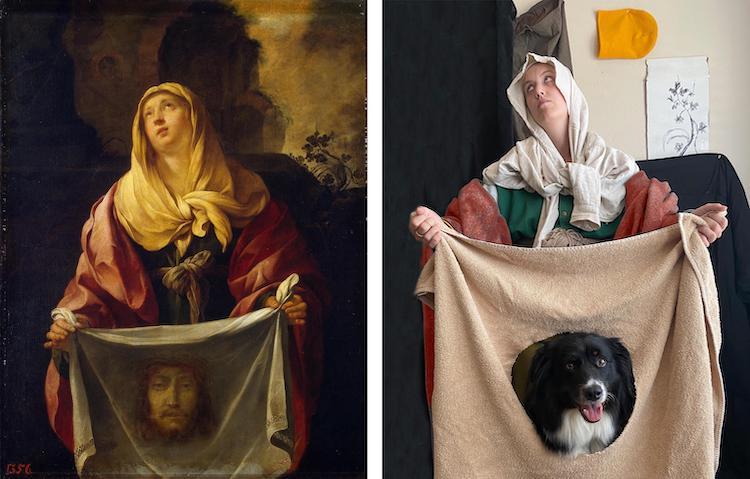 In the spring of 2020, a creative challenge began to take over the internet. Known as the Getty Museum Challenge, it encouraged people from across the globe to recreate works of art using what they had on hand in their homes. (It came at a time when much of the world was in lockdown due to COVID-19.) Artist Eliza Reinhardt took part in the challenge with the help of her pup Finn… and they never stopped. For nearly a year, the duo has been recreating famous artworks each day and the results are magnificent.

Every morning, Reinhardt will decide on the painting that she and Finn will pay a unique homage to that day. She then goes through her ever-growing collection of props and arranges and assembles them so that they capture the essence of the chosen work. Finn plays an integral part in each photo. Aside from adding the “cute” factor, the Australian Shepherd dresses up in full costumes and takes his role in each piece seriously (even if he’s grinning).

Working with Finn has allowed Reinhardt to strengthen her bond with her pup as well as the opportunity to rethink the original works. In the piece titled Gian Lodovico Madruzzo, for instance, the role of the human and dog is swapped. Finn is dressed as a man while Reinhardt is on all fours behind him with socks attached to her head for ears. It’s creative and unexpected, and it ultimately highlights why the Getty Museum Challenge is so delightful in the first place.

We spoke with Reinhardt about the logistics of working with a dog and creating—sometimes very complex—compositions each day. Scroll down for her exclusive interview with My Modern Met. 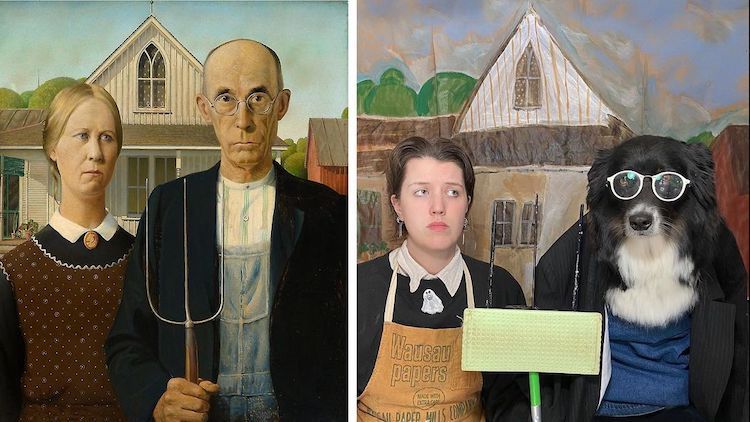 What was your creative background prior to recreating famous artworks?

I graduated from the University of Iowa with a BFA in painting in 2018. Painting is my first love, and I still paint almost daily! I was never the “artistic child” growing up, but I had a horrible concussion in 2013 and suffer from retrograde amnesia. In college, I tried everything I could think of but nothing sparked my interest. I took a drawing class and have been hooked ever since. 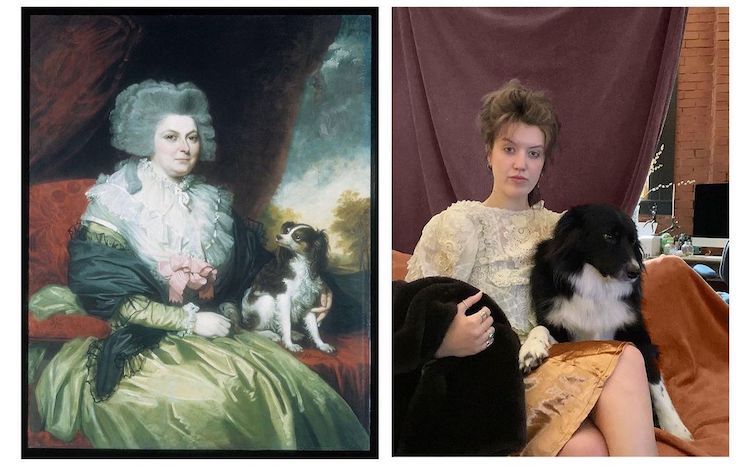 What was your first recreation?

(I had to go waaaaay back in my phone to find this, ha.) It was April 2nd, 2020, we did Lady with a Dog (1786) from The Metropolitan Museum of Art (aka The MET). I vividly remember my mom told me about the museum challenge and thought I should do it with Finn (thanks mom!). In the beginning, it didn’t occur to me to be “funny” about it… I took it VERY literally. 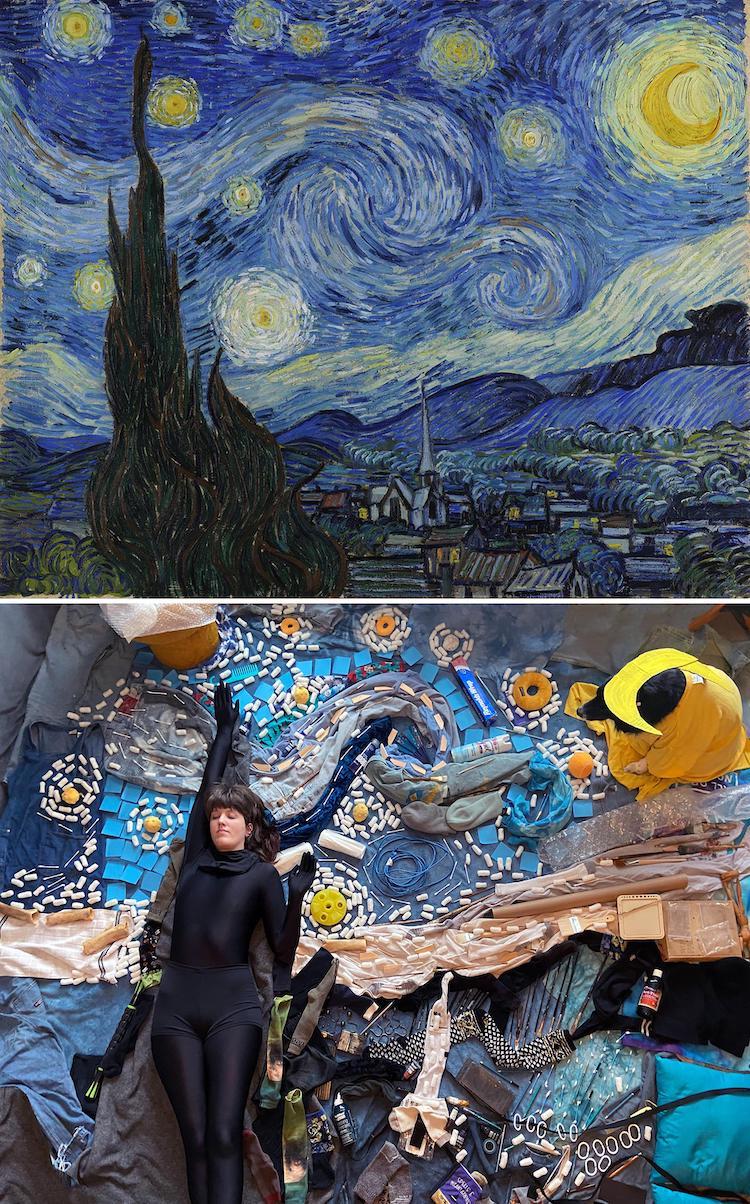 How has your process changed since then?

Lady with a Dog is so simple. I remember I went to The MET online collection and searched for “dog painting” because Finn is a dog, he can only be a dog in the recreation. That didn’t last long as I started to question it…why can’t Finn be a person? A bird? A vase? He can be anything! I think once I got out of the mindset that Finn had to be a dog things really took off. They slowly got more and more complex. I started painting backgrounds or making props out of cardboard. I moved to Texas in August and having a larger space really allowed the works to grow. I have painted 10 by 8-foot backgrounds, made cardboard armor, and I’ve done several huge floor pieces (14+ feet). For example: Guernica (by Picasso), Mural (by Pollock), Starry Night (by Van Gogh). 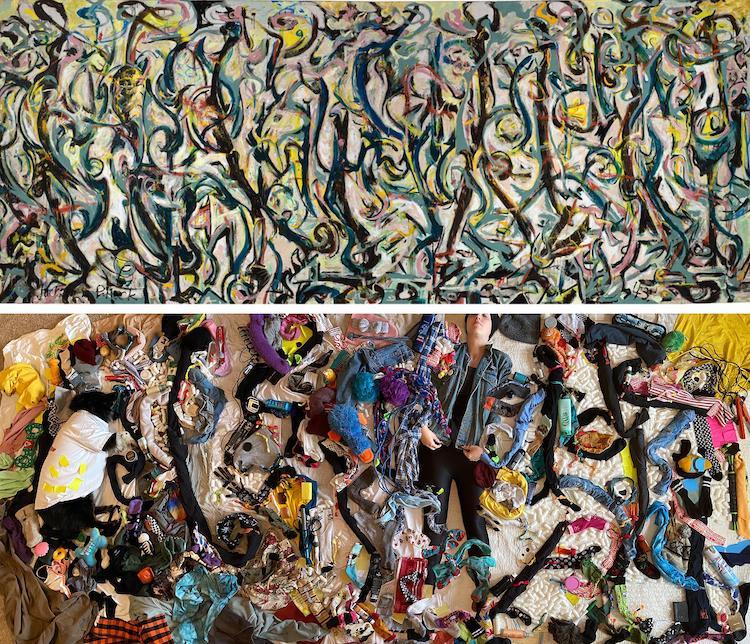 Tell us about working with your pup. How do you get Finn to do so many poses and wear so many costumes?

Finn is a superstar! He’s a 3-year-old Australian Shepherd and a velcro dog. I thought that when we started this project he would enjoy helping out and doing something with me, but I never expected he would take it as seriously as he does. He’s a working breed, so he has 110% taken these daily photos as his job. He will work so hard and try to do absolutely anything I ask.

Being an Aussie, he comes with a lot of anxiety. I have found that he loves to wear toddler shirts / or a thunder shirt because it makes him feel safe. So the costumes he absolutely adores. I’ll ask him if he’s ready to take the photo and hold open a t-shirt, he’ll run over and stick his head in and then give me each of his paws to put through the sleeves. As for poses… he is such a trooper. He will sit on my studio “painter’s stool” or on a skinny piano bench. It seems like he knows that if he’s on the stool or I placed him in a certain position he isn’t supposed to move. Once I say, “Okay! You’re all done!” He is SO proud of himself, gives me a high five, and of course, gets a treat. 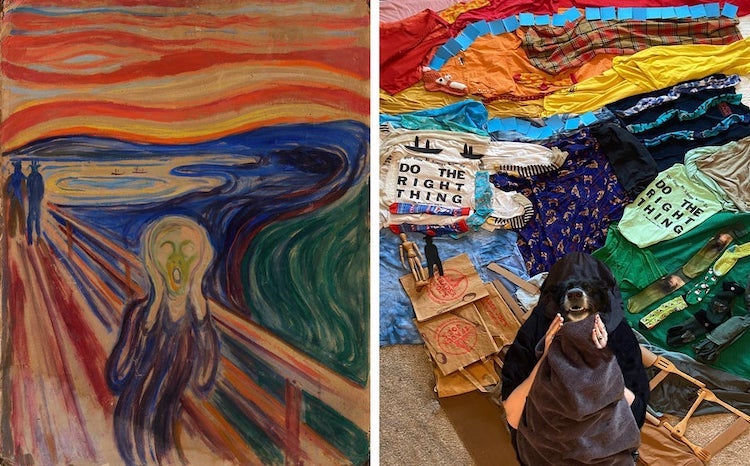 Some of the works you recreate are very complex, whether it’s in terms of composition or other logistics. How do you go about gathering all the materials, finding costumes, and making sure you both are positioned correctly?

At this point, I have a go-to list of items in my head such as packing peanuts, dog cone of shame, Finn’s toys, etc. They’re all piled in the studio, along with all the backgrounds that I’ve painted and props that I’ve made. After all, I never know when I’ll need a cardboard sword again! I’ve been pretty thankful that I come from a long line of artists (mom, grandma, great-grandma) so I have a lot of quirky, cool stuff that has really come in handy. If I don’t have it, I’ll figure out a way to make it.

Do you have someone who helps you?

My partner is a photographer and if he’s not working and it’s a really difficult shot I’ll ask him to take it for me, but for the most part, I like to try and do it myself. I use a bendy tripod and a Bluetooth remote that I sometimes have to hold in my mouth if both of my hands are occupied. Finn is an absolute angel and will hold pretty much any position I ask him to, but sometimes it will be many tries of setting it up, taking the photo, looking through them, and realizing something was wrong—needing to set it back up, try again and fingers crossed it’s a winner!

How far in advance do you plan a recreation?

I don’t really do any planning ahead of time. I pick the photo at around 7 am the day we post it. The only time I “plan” is for a really complex one, like the Bosch (Hell), Mural, or Guernica. Hell, for example, had a massive background I had to paint. Therefore, I did the first layer the night before so that it had time to dry overnight. That’s about the most “planning” I’ve done. In the beginning, I would get up and hunt through art books and online collections the morning of and pick that way. Because we have done about 200 of them, I have a folder where I’ll put works that I think I would like to do eventually and if I can’t find one that morning I’ll pull from that folder. I really enjoy the challenge of needing to figure things out while in the moment. I’ve been told the photos are like “gesture drawings” which I just love—it feels that way to me. 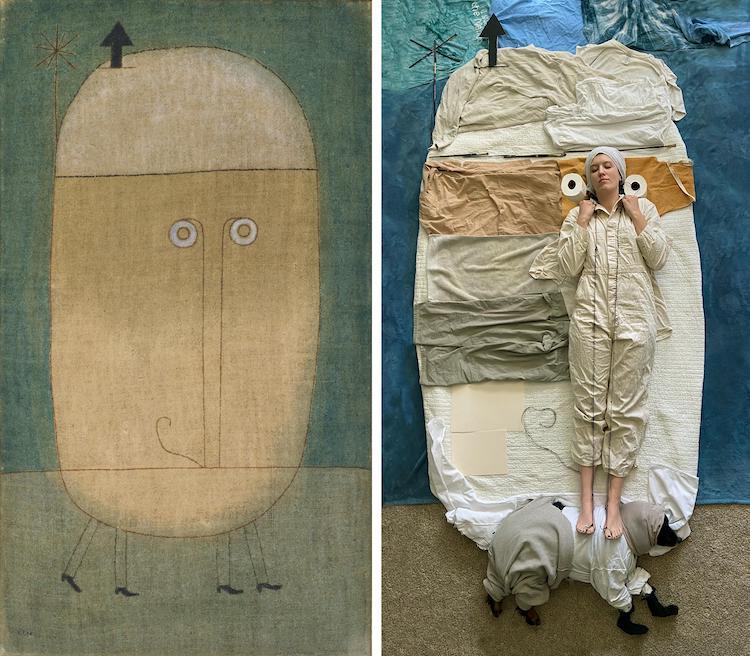 How long does it take, on average, to produce one?

On average my recreations take about four to six hours, and the really complex ones take about 10 hours, but that’s not every day we do those.

Has reproducing so many artworks opened you up to new genres of art?

Most definitely. Every day I get to explore gorgeous collections and books of artworks from all over the world. I’ve come to realize how much art is out there. I felt like I knew “a lot” of art from studying it in college, but it’s so fascinating to be scrolling through collections, or flipping through books and not recognize anything! Personally, I have discovered so many new artists whose work I absolutely adore. It’s such a gift to be able to share work with an audience and receive such positive feedback about how much they enjoy learning about new artists, paintings, and genres. 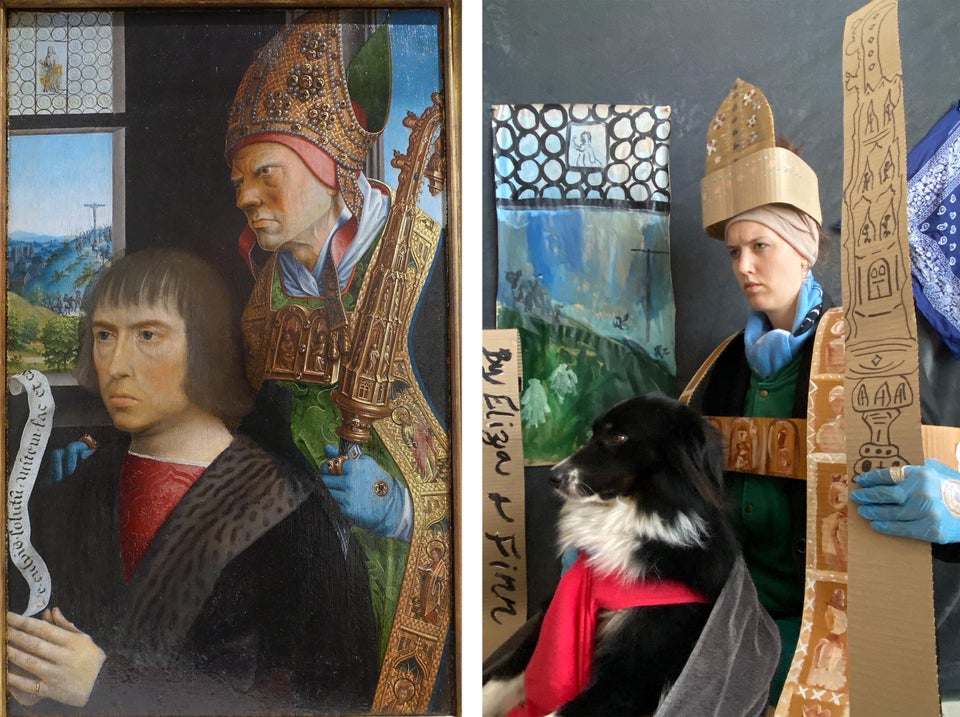 How long are you planning to go along with your recreations?

Finn is only 3 years old, and every day he waits on the couch in the studio until it’s showtime, so I can’t see us stopping anytime soon. I made an Etsy shop this past year where I sell items featuring our recreations. For example, I self-published a book of our early work, have made postcard packs (themed with different artists/ genres), and we also did a calendar! 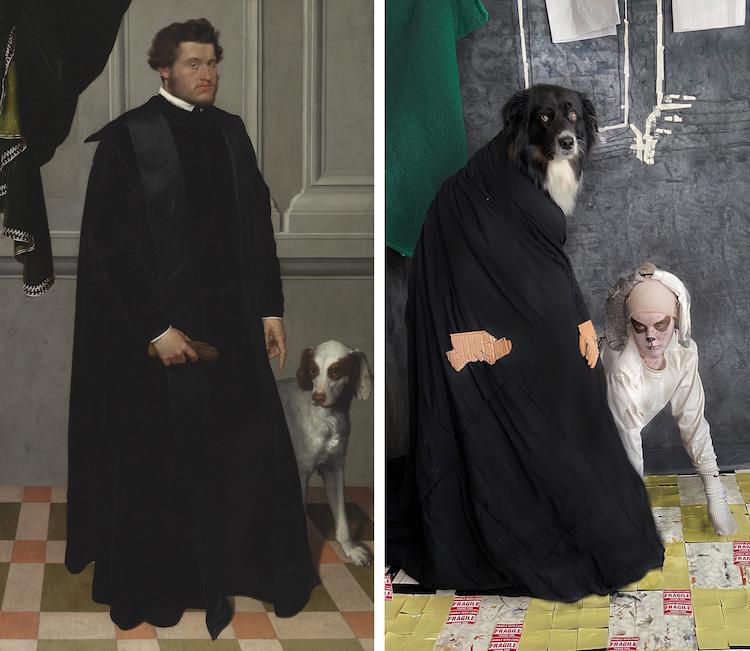 Do you have any other creative endeavors on the horizon?

The enthusiasm that I have received with the project and our products has been overwhelming. One of the most rewarding things has been the number of people that contact me to tell me how my work has allowed them to look at and appreciate works of art they never would have noticed before. I think there is a distance that many people feel when they are asked to talk about or analyze art. They might not feel qualified or comfortable to engage in a discussion about it. Bringing Finn into the ‘picture’ quite literally, makes the painting more approachable, accessible, and less intimidating. Also, what I do when it comes to breaking down the painting into shapes, color blocks, studying the composition, and trying to imitate the perspective, would make a really wonderful course of study for kids and adults.

It would be fantastic if I could share this knowledge through museum programs, for example! I hope that my body of work will allow me to follow paths, whether graduate school, teaching programs, museum engagements, gallery shows, etc. so that I might continue to bring love and appreciation of art to everyone. 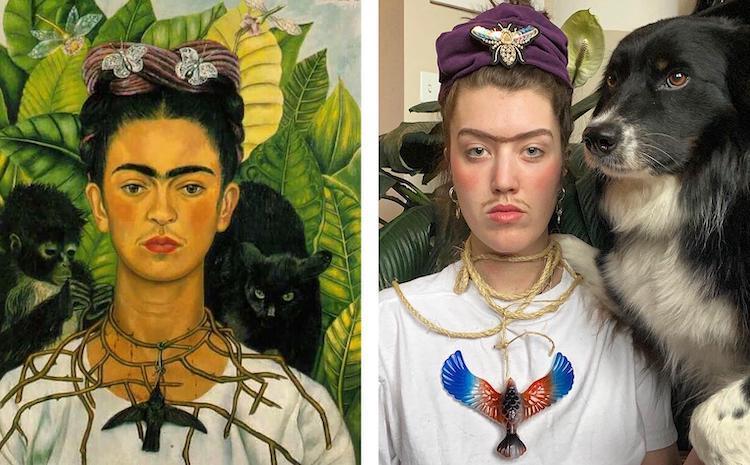 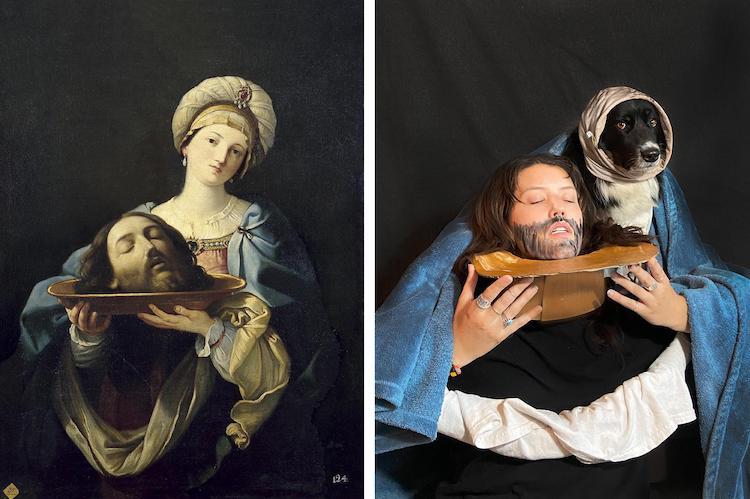 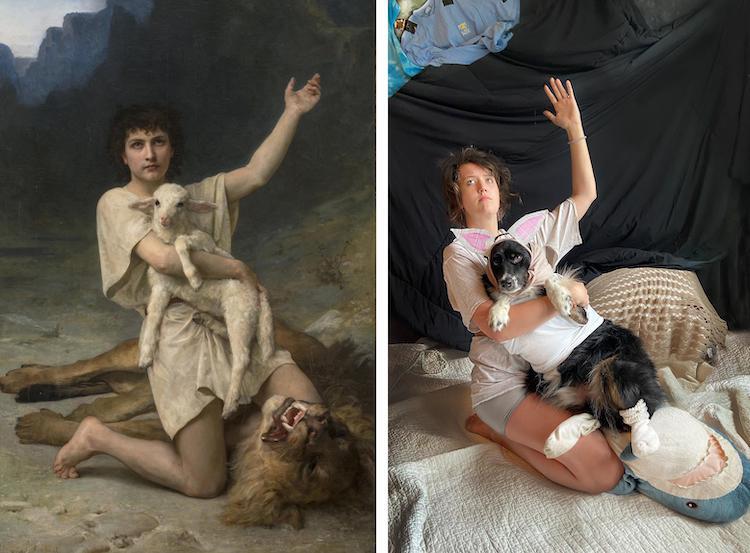 Best of 2020: Top 19 Creative Projects Made During the COVID-19 Crisis