TAMPA, Fla. – Aric Almirola never dreamed of a Tampa sports streak like this. When he was growing up, three Tampa teams playing for championships wasn’t just unlikely — it was impossible.

The city had only one big-time professional sports franchise, and that team wasn’t very big-time at all. After all, that team, the Buccaneers, played in a hulking, concrete sauna of a stadium known as “The Big Sombrero.”

“My earliest memory of Tampa sports was going to a Bucs game at the old Sombrero,” says Almirola, driver of the No. 10 Ford Mustang on the NASCAR circuit. “They were orange and white and honestly terrible.” 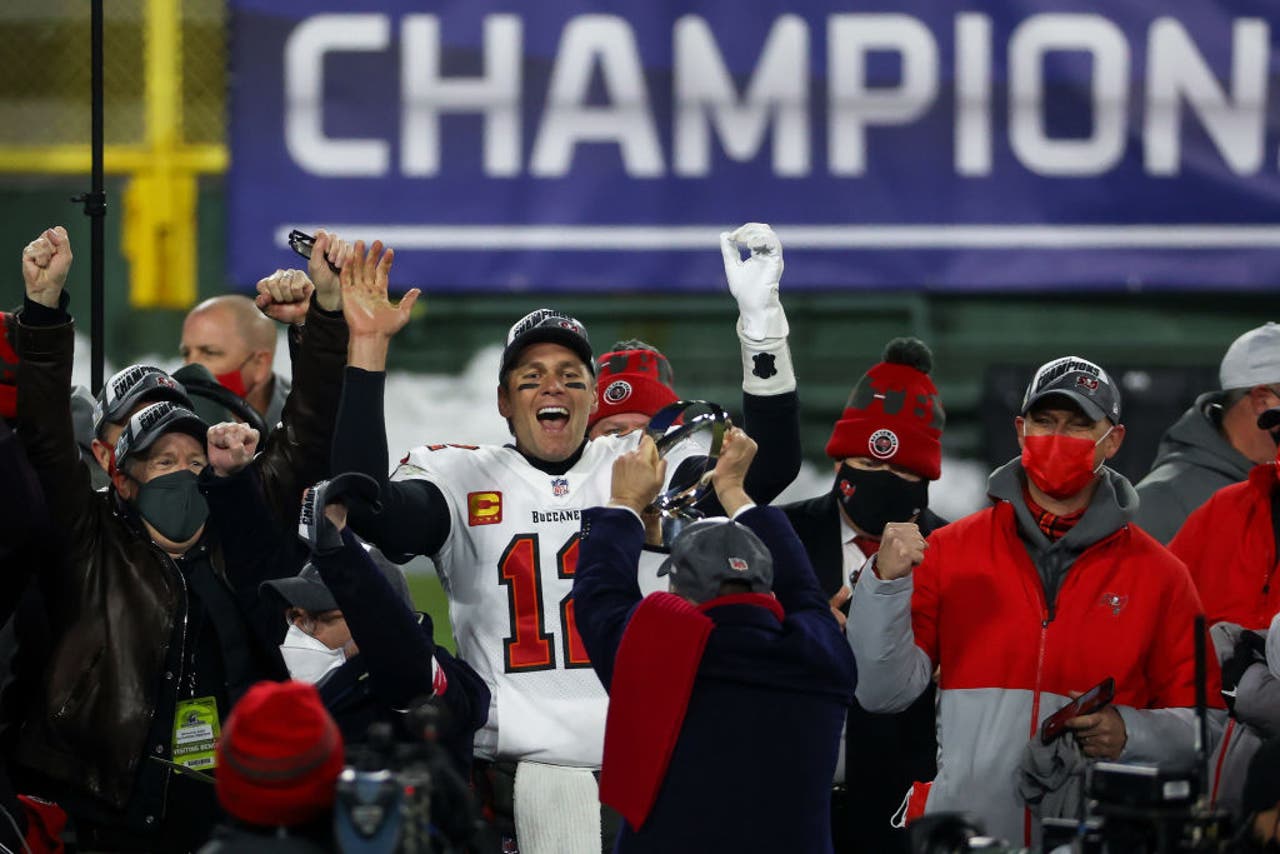 Tom Brady has helped change Tampa’s image by taking the Bucs to their second Super Bowl – and his 10th.

Back then, the Lightning were nonexistent, and the Rays were but a glimmer in the eye of original owner Vince Naimoli.

“When I was really young,” Almirola says, “I was a Braves fan.”

The Braves’ home field was almost 500 miles away in Atlanta.

Almirola isn’t ancient; he’s 36. But in the past five months, the Lightning won the Stanley Cup, the Rays won the American League pennant, and now the Buccaneers are in Super Bowl LV, a game being played right on Dale Mabry Highway. 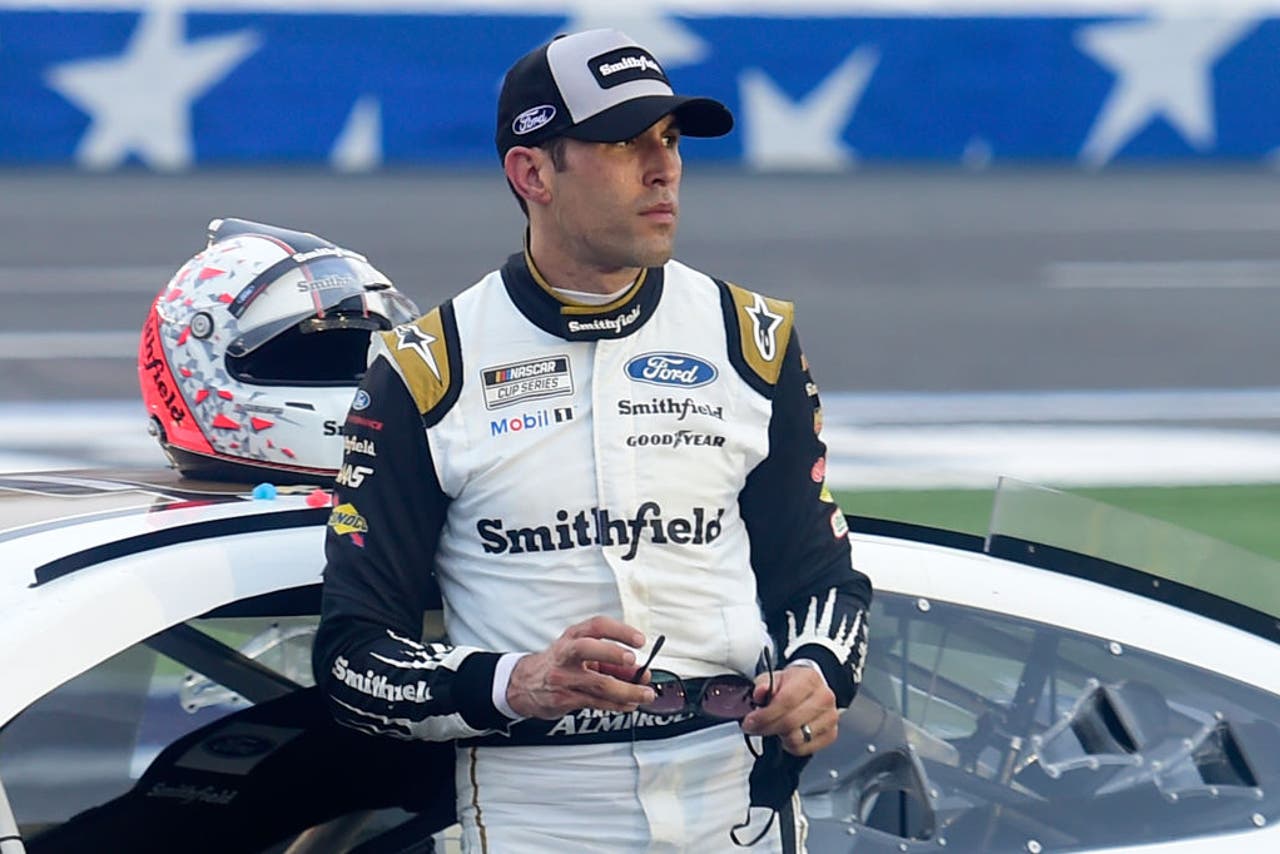 “It’s something, 100 years from now, they’ll still talk about,” Bucs general manager Jason Licht says. “During the pandemic, all the teams had success.”

And that makes it bittersweet. The COVID-19 pandemic has cast a shadow over the entire sports landscape, disrupting each season and muting each celebration.

The Lightning had their entire championship run in Canada; the Rays fought their way to the World Series in California and Texas. Even the semi-pro Rowdies soccer club made the USL title round, only to see their final match canceled because of COVID.

Now, Super Bowl LV has come to Tampa, but the event is something less than the weeklong party it might’ve been.

“Tampa is a beautiful place to do that,” Almirola says. “To have it squashed and limited, it’s not showing Tampa at its full potential.”

The silver lining is that Tampa’s potential is surging right along with its sports. This part of Florida is one of the country’s fastest-growing metropolitan areas, with its population having more than doubled over the past 40 years. Visitors to Sunday’s Super Bowl won’t recognize Tampa compared to the town that hosted the game in 1984, the year Almirola was born.

“When I first got here,” former mayor Bob Buckhorn says, “there were 800 people living downtown — and 400 lived in the jail.”

Tampa now evokes thoughts of lolling waves, pristine boats and sunlight glinting off high-rise apartment towers. But the city’s roots come from Cuban and Spanish immigrants, many of whom came here to roll cigars.

“We always look at ourselves as scrappers,” says Buckhorn, who was mayor from 2011 to 2019. “This is not a city that spends its life on the beach. It’s working people.”

There is a small-town feel, even with sports celebrities such as Derek Jeter living here. Jeter’s mansion — which Bucs quarterback Tom Brady rented — is only a short walk from Buckhorn’s house. Buckhorn sees Tom and Gisele walking their dogs.

The neighborhood feel can be amusing. Brady mistakenly walked into a stranger’s house this summer, thinking it was the residence of Bucs offensive coordinator Byron Leftwich.

Then there was the time a city recreation worker spotted Brady in a local park — a violation of lockdown rules. “Sorry, sir!” he politely said. “The park is closed.” Mayor Jane Castor mentioned the sighting as an aside during an online town meeting, and it went viral.

“It wasn’t like it was a big deal,” she says with a laugh, “but that’s kind of the way Tampa is.”

There’s a bit of a double identity: the new Tampa, with Tom Freakin’ Brady as just another Florida Man, and the old Tampa, where few residents have memories of sports bedlam. When Brady arrived in college at Michigan in the mid-1990s, the Bucs had hosted a grand total of two playoff games in their history, and they lost one of them by a score of 9-0.

“I vividly remember my father at a picnic table in the garage, listening to the Bucs on a transistor radio,” Castor says, “being disappointed year after year.”

When the NHL’s Lightning arrived in 1992, the team’s first home arena was located at the local fairgrounds in an 11,000-seat building used for horse shows and REO Speedwagon concerts.

“I was 8 years old,” Almirola recalls. “Hockey was so far out of the norm for us in Florida. I thought, ‘What?! We’re in Florida. We don’t even get snow.’ I didn’t understand how we were going to make it work. Won’t the ice melt?”

The ice did not melt — at least not during games — but the fairgrounds weren’t going to work. And neither would the Lightning’s next stop: Tropicana Field. Back then, it was called the ThunderDome.

But fans loved the new franchise. The team made the playoffs for the first time in 1996, and one postseason game that year drew more than 28,000 fans — still a record. “I was assistant to the mayor,” Buckhorn says. “Everyone was astounded that hockey could succeed in Florida.”

The MLB “Devil Rays” — so named because a minor-league team in Maui owned the rights to “Sting Rays” – arrived in the ThunderDome in 1998. They fielded good teams, playoff teams, but nationally, the Rays’ narrative remained stuck on the dreary dome and its poor attendance.

When Tampa pro sports finally found success, the moment was both happy and homey. Castor was an assistant police chief when the Bucs won the Super Bowl in 2002, and she helped arrange the parade. Her kids brought photos of the occasion to school, and a teacher asked if quarterback Brad Johnson were a member of their family.

So you can see why the past year’s successes have created such a rush. Brady’s signing with the Bucs and bringing Rob Gronkowski made quite a statement. Buckhorn thinks the ageless star QB has already been a major marketing force for the city: “He would not have gone to a city on the descent.”

Then came the Lightning’s run to the Stanley Cup title and an ensuing championship parade of boats and WaveRunners. It was distinctly Tampa — wet and a little wild. It was also a welcome jolt during a difficult year.

Still, Tampa has always been a Bucs town. When the team won in 2002 for its first and only Super Bowl, Almirola, a University of Central Florida student at the time, jumped into his car and drove from his dorm in Orlando to join the party down Interstate 4. “That night is a little fuzzy,” he admits.

The local love for members of the 2002 Super Bowl squad endures, but this season’s team is an offensive power unlike most others in franchise history. (Until last season, the Bucs’ all-time leading passer was Vinny Testaverde.)

A Super Bowl victory — at home, no less — would double the title haul for Tampa’s big three franchises in the span of a little more than four months. The celebration would likely linger long after the pandemic.

But there is one more title shot to keep in mind, only a week after the Super Bowl.

“Being able to win the Daytona 500 as a Tampa resident,” Almirola says, “that would be a great way to cap off the run.”

Eric Adelson is a freelance journalist based in Orlando, Florida. He can be reached at [email protected] or on Twitter @eric_adelson.

Get more from National Football League Add to your favorites to get information about games, news and more.